Battle of the Titans Grand Opening 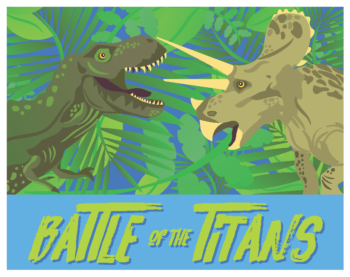 Join us as we open our newest traveling exhibit, Battle of the Titans on January 26th! This Spring 2019 traveling exhibit explores the unique relationship between two gigantic opponents as well as other species and the environment that existed during their time on Earth.

In the near corner stands Triceratops. In the far corner, Tyrannosaurus Rex locks his eyes on his opponent.
And the winner is?!

Visit DHDC to find out how this match likely went down. Just as in a boxing match, the exhibit provides a detailed comparison of each dino and shows the advantages and disadvantages both would have in battle. Visitors learn that not only were they perfectly matched to fight each other, but they depended on each other to survive as a species.

Facts and clues are given throughout the exhibit to this strange paradox of interdependence. But who wins? The answer lies in the environment – the plants, forest and ecology that shaped their existence, and ultimately led to their extinction.
This Wonder Works exhibit explores the amazing mingled destinies of plants, dinosaurs, and mankind.

Battle of the Titans opens to the public at the Don Harrington Discovery Center on January 26th and will be on display through May 19th.

Thank you to all of our donors that gave during the Panhandle Gives Campaign- your contribution has helped us bring this exhibit to our museum!

If you’re a DHDC member, join us for a Members-only preview of this exhibit one day earlier on January 25th from 7:00 – 8:30 pm. Not a  member? There is still time to join! Click here for more info.